Nomad Madscad Stickbaits, like all Nomad lures, were tried, tested and developed on Nomad Sports fishing Charters in the harshest of conditions on the largest fish that the Great Barrier reef has to offer. All Madscad stick baits come with BKK Hardware and Hooks so you don’t have to do a thing to them, just throw them at the biggest fish possible straight out of the box. The Madscad’s have to be one of the easiest Stickbaits on the market to use. They have an awesome action on a steady slow or fast retrieve, and dart around frantically when twitched and swept like a traditional stick bait. The Madscads are a heavy sinking stickbait so cast like bullets too. They have caught every species that will eat a lure and lives on the reef, and they catch Kingfish, Salmon, Tailor and cold water species too. Madscads come in a large variation of sizes so there is one to suit most line classes and most species. The Largest in the Range are the GT and Large Pelagic Specific Madscad 190mm that come in a fast sand slow sink. The smaller sizes are terrific for flats and inshore fishing, there is a 150, 115 and 95mm, and they all catch fish. 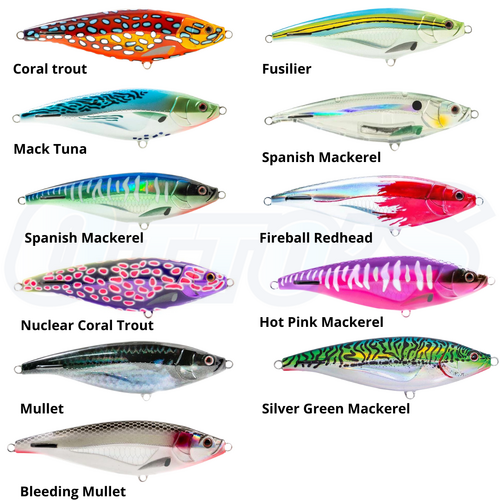